Published on July 29, 2014 by AllCap Contributor 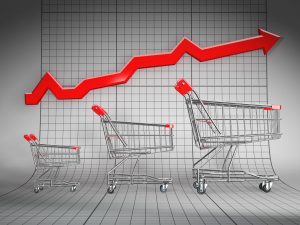 Investor interest in the middle-market retail sector appears to be heating up. And as a number of key market conditions evolve, a more favorable environment for retail M&A may be on the horizon. Aided by an improving economy and growing global markets, retail business owners and investors alike are getting in position to make a move.

Today, retail M&A is at a point where retailers and investors really need each other. Retailers need investors to aid expansion efforts and gain a competitive edge as omnichannel retailing explodes. At the same time, both private equity and corporate investors have stockpiles of cash they need to invest.

So why are things looking up for retail M&A?

Growing consumer confidence. Consumers need to have the confidence to spend money and the disposable income available to give retail the boost it needs. If we look at the Consumer Confidence Index in May 2010 (63.3),1 compared to May 2014 (83),2 we’ve come a long way.

Sure, we have a way to go, but clearly, consumer confidence is trending up. At the same time more consumers are employed today. The unemployment rate at the end of May was 6.3 percent.3 While unemployment is still a drag on the U.S. economy, it has declined significantly from the staggering 10 percent that the Bureau of Labor Statistics reported in 2010.

Retail sales numbers are slowly moving in the right direction, too, which means consumers are spending more. Movement in the housing market has given big box retailers Lowes and Home Depot a boost, and other retail segments are expected to follow.4

Expansion opportunities in the global market. PricewaterhouseCoopers (PwC) reported that Q1 2014 retail and consumer M&A activity across the border increased on both a year-over-year and sequential basis. Cross border activity accounted for 59 percent of total deal volume in Q1 2014 as compared to the 51 percent average experienced in the past eight quarters.5

In addition, a PwC CEO survey revealed that “18 percent of retail and consumer CEOs plan to initiate or complete a cross border deal” in the next year. Rapidly growing international economies are providing appealing opportunities for retailers unable to achieve growth organically.5 Business owners should seek M&A with investors who have insight and access to resources in global markets.

Consumer demand for omnichannel retailing. Today’s consumers expect to complete retail transactions in a variety of ways: from traditional storefronts, outlet stores and online stores, to emerging mobile and social transaction technologies. To stay competitive in the retail environment, business owners will need to adapt.

Many retailers won’t have the know-how or funding to develop an efficient and secure omnichannel plan. You can expect these retailers to seek out investors and investment bankers who can facilitate financing and expertise in the omnichannel environment.

Investor interest has been peaked due to low valuations. Private equity firm Sycamore Partners announced in June that they were purchasing a 9.9 percent stake in teen/young adult apparel retailer Express. This led a Wedbush Securities analyst to predict that investors would be eyeing other lower valued retailers in the niche, noting that Express was the cheapest stock at the time of the announcement.6

CNBC’s Jim Cramer suspects businesses in the retail space may be undervalued, too. He noted that when Carl Icahn put a stake in Family Dollar stores, “rival Dollar General rallied 7 percent based on speculation that it could merge with Family Dollar.”7

Big retailers are using M&A to grow. Many retailers struggle to grow organically, which often means they will seek growth through acquisition. We’ve seen this occur among some high-profile retailers who have gone after direct competitors to meet expansion goals. Two prime examples include the $1.8 billion Men’s Wearhouse acquistion of Jos. A Bank this past March and the merger of Office Max and Office Depot last year.

Activity is slowly heating up in the retail sector – for deals of all sizes. This could bode well for middle-market retailers, manufacturers and supply chain service providers. Eventually, investor competition to acquire successful, privately held, retail-focused companies will accelerate. And as this investor competition swells, company valuations will rise.