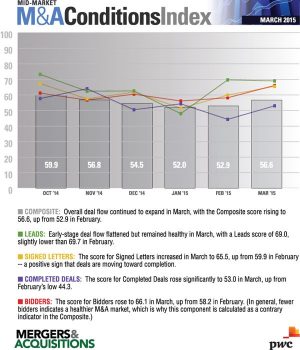 Deal flow rose in March for the second month in a row, according to the Mid-Market M&A Conditions Index (MACI), a barometer created by Mergers & Acquisitions and sponsored by PwC. (See related graphic.)

Dealmakers reported a significant uptick in the second two months of the year, after a sluggish January. While January is often a slow month for M&A, it was the third month in a row to decline from the high of October 2014, raising some doubts about the rosy forecast for 2015.

However, survey respondents have cited several factors behind their enthusiasm in March. They include falling fuel prices, rising consumer confidence, and motivation to get deals done before a potential interest rate hike later in the year.

Transaction pros predicted that M&A in 2015 will outshine 2014. The MACI is a diffusion index, derived from monthly surveys of approximately 250 executives. Readings above 50 indicate an expansion in M&A activity, and readings below 50 indicate a contraction.