By Joseph Triepke – GE was once a purely industrial business and aspires to be such again. GE has decided it doesn’t want to be a bank anymore, much less the 7th largest bank in the U.S. GE Capital has become so enormous that the Feds have designated it too big to fail, creating tougher regulatory burdens and risks that GE shareholders oppose.

Already one of the world’s most acquisitive companies, the conglomerate is about to see a massive influx of cash as it exits its finance business. Just yesterday, GE freed up $12bn with the sale of its private equity lending arm, and this is just the beginning.

GE has long envied the leaders of the oil service, drilling and equipment sector, and likely sees great value in the sector due to the downturn.

GE’s most significant strategy decision in many years came down in April as it disclosed intent to exit GE Capital. And shareholders applauded the shift, sending the stock 11% higher on the day of the announcement (+$28bn market value).

The bulk of the $500bn entity will be sold or spun off over the next two years as the profits of the business aren’t worth the regulatory burden and investor opposition to retention given the risk. GE Capital quantified its assets at $500bn in a letter to the Federal Reserve in May – a figure that makes it the 7th largest bank in the U.S. As it exits its finance business, the core company will amass a massive war chest. CEO Jeff Immelt’s plan to divest the bulk of GE Capital could free up over $200bn, and some $40bn could be available for take outs post-restructuring if estimates

from the Bloomberg Intelligence team prove correct. Share buybacks and dividends will soak up much of the cash, but GE’s M&A team will have plenty of dry powder to work with; and, they’ll likely be quite busy over the next 12-36 months. 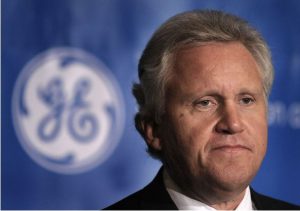 Earlier this quarter, GE sold $27bn worth of office building and commercial real estate debt to Blackstone, Wells Fargo and other buyers. Yesterday, GE announced the sale of its U.S. private equity lending arm to Canada Pension Plan Investment Board for $12bn. These transactions are just the beginning. GE Capital CEO Keith Sherin said this week that the company is talking with dozens of bidders for assets.

The life sciences and core industrial sectors have potential targets GE will chase. But O&G is likely to get its fair share of looks from the giant as well – Immelt’s management team is committed to the sector, and the downturn has created some excellent value.

In fact, O&G was GE’s fastest-growing segment between 2009 and 2013, with sales growth of 57% to $15.2bn over this period as U.S. unconventional oil drove growth. In 2013, GE bought Lufkin for $3.3bn using proceeds from another divestiture, and before Halliburton’s move on Baker Hughes, GE was discussed as a potential bidder.

Given GE’s size, and the size of their war chest, the company will need to do big deals to make it worth their time. For context, a $40bn war chest is enough to take out the combined market value of the Big 3 equipment companies (National Oilwell Varco, Cameron and FMC Technologies). That said, smaller tuck in acquisitions aren’t off the table, and GE continues to surface in conversations about bidders for the assets Halliburton and Baker Hughes need to divest to merge.

In short, everything in the sector is on the table, and we suspect GE could emerge as a much more significant O&G player when the dust settles on its banking exit.